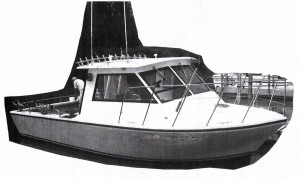 Captain Don McGee with King and Eye Charters has been fishing the beautiful Lake Erie waters since 1981. He is a U.S.C.G Licensed Skipper, Ohio Licensed Guide and Fully Insured. Please hop aboard one of our charters for some Great Lake Erie Angling!

The most popular and sought after sport fish on Lake Erie. The Western Basin of Lake Erie is “The Walleye Capital of the World”! April through August are the prime months for Walleye, although good catches are also made in September and October. This is absolutely the best freshwater fishing you will ever experience.

The best time to catch this delicious tasting fish is late summer through October. It’s a popular fish with all young anglers. The action never stops once you start fishing for these Lake Erie “tasties”.

The “good fight” fish known for its aerial acrobatics and fishing challenge for light tackle. Two & three pound fish are common, with an occasional five pound plus being taken!

Our Charter Boats On Lake Erie